THE TURNING...it has begun!
​
The Elijah Task

Indeed Elijah is coming first and restores all things, Mark 9:12.

Those from among you
Shall build the old waste places;
You shall raise up the foundations of many generations;
And you shall be called the Repairer of the Breach,
The Restorer of Streets to Dwell In.
Isaiah 58:12​

Since the "Reunited as One" Summit in Colorado Springs, June 17-19, we have sensed breakthrough and an open door before us.  What does that mean?  It is summer-time, it is also the “Straits of Tammuz.”  Both conjure different thoughts and feelings.  One for delightful vacations and family times, the other for war and destruction.  Such is the dichotomy of the times we are now in.  We are in a preparation time for things to come in the Fall.  Many are going to and fro doing what they usually do in the summer (Daniel 12:4), oblivious to the possibilities of what we are about to confront.  Undercurrents of a dynamic shift are in the winds.  We experienced that shift at the Summit and the appearance of a white buffalo was no accident.  This is not a new age sign, but rather a sign from God.  For Native Americans, the white buffalo is a sign that God has heard their prayers.  God frequently uses nature to confirm His purpose, Elijah and the rain, 1 Kings 18:44, James 5:17-18; Jesus confirmed by the dove, Matthew 3:16-17; the earthquake marking Jesus' death on the cross, Matthew 27:51, etc.  With a 1 in 10 million chance of seeing one, they saw two on their journey back from the Continental Divide! Such sitings were extraordinary signs and not easily dismissed.  Furthermore, it began to rain and continued throughout the following days.  A door has opened inviting us forward.  God is going to do something powerful and we need to be prepared.  How then shall we proceed?

This is not a political message, but rather a call to alertness.  In California, many have been working towards a “Recall election” of our governor slated for this Fall.  A grassroots movement is rising to contend for the freedom and destiny of our state from a government that has gone amiss by violating biblical values endangering the moral fabric of the upcoming generations.

Jesus' message to the seven churches of Revelation carries answers for us today.  The church at Thyatira, Rev 2:18-29 is the smallest church and most insignificant of the seven churches but received the longest of the letters.  In it, Jesus presents Himself as the "Son of God," Rev 2:18.  It is the only time He says that in the seven letters.  In other words, He is stepping in and saying something really important and with authority.  He starts positively with what He says about the Church.  He knows their works, love, service, and faith, v. 19.  The one thing He has against it is that they tolerate the woman Jezebel.  Whether her name was that or it is a type and pattern of Ahab's wife, Jezebel, in 1 Kings 18-19, we don't know.  In this context today it represents a spirit.  It impacts both men and women and can work its way through governmental systems.

In His letter, Jesus is fed up with her and is quite serious, "I will kill her children with death, and all the churches shall know that I am He who searches the minds and hearts, v. 23.  These words are terrifying yet encouraging. He was pointing a finger at something that deeply concerned Him.  Here in California, we have sensed a major Jezebel stronghold working in our state for some time!  We are in a war.  We cannot underestimate it.  God desires to bring forth the fruits of righteousness in our state...but we will need to know how to war and contend.

MAJOR POINT!   Get this!  In the letter Jesus goes on to say, "Hold fast what you have till I come.  And he who overcomes, and keeps My works until the end to him I will give power over the nations!"  We have often heard, "As California goes, so goes the nation."  It is a statement that has circled around for years.  Every state has a destiny and purpose, but now there is a call to contend for CA destiny.   In this recall election, CA could be influencing the very direction of our nation.  We experienced breakthrough in COS.  Why?  It could very well be the beginning of the breaking of the Jezebel stronghold over our nation.  I hope you are seeing the fire and passion that I feel in my heart trying to relay this. 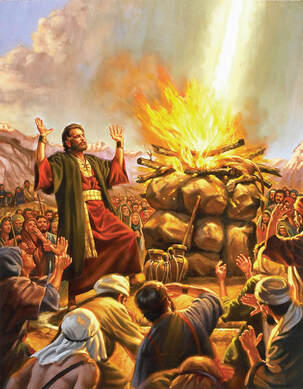 THE ELIJAH TASK:  How was Jezebel defeated?  There are lessons from the life of Elijah: How Elijah conducted himself left an indelible stamp on Biblical history and God’s plan for Israel.  Defeating the power of Jezebel over the Baal worship marked a breakthrough time in Israel’s history that continues to influence us today. When Jesus took Peter, James and John to a high mountain and was transfigured, who should show up?  Moses and Elijah!  On their way back, Jesus tells them, “Indeed Elijah is coming first and restores all things,” Mark 9:12.  We are in a time when God is raising up an Elijah army that will contend and stand with Jesus in days of adversity.

Now concerning Jezebel, I Kings 21:23 “And concerning Jezebel the Lord also spoke saying, “The dogs shall eat Jezebel by the wall of Jezreel”  Just as in the days of old, Jezebel will be eaten by and put under foot in Jesus name and her wiles will not prosper in the land that we possess.  We are at a pivot point.  It is a watershed time for our nation.  We are in the cusp of a possible shift.  The white buffalo seen in COS is a sign and a wonder.  The natural things are beginning to shift.  CONTEND  CONTEND CONTEND!  Do not fall prey to complacency or discouragement.  THIS WAR IS REAL!  War has been declared and the heavenly host is responding.

STEPS FORWARD: Now is the time for faith and action!  The turning is underway!

Susan Rowe
​July 1, 2021  ​
Those from among you
Shall build the old waste places;
You shall raise up the foundations of many generations;
And you shall be called the Repairer of the Breach,
The Restorer of Streets to Dwell In.
Isaiah 58:12