Athaliah at the Gates II

Recalibrating the Call of Watchmen Today

We believe the process we have been through in the USA election is uncovering a kairos convergence of time as well as a significant stronghold blocking the purposes of God that requires our attention.  No matter where you stand in the United States election process, it is evident there are systemic issues eating away at the foundations of the nation and the nation(s).  Many prophets are speaking out and urging continued diligence.  Over this past week, a vision has repeatedly appeared.  Its interpretation has come into much greater clarity and thus this review towards critical issues underlying and driving the USA election.


VISION:
The vision was of the United States, laid out in a satellite view.  Suddenly, a big boot (like military boot) came down, landed on America with a determined force that shook the ground.  Its heel was on the west coast and toe on the east coast. 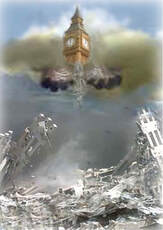 INTERPRETATION:
The interpretation of the vision has changed as the election results have rolled in.   As the vision has repeated over the past week, it has caught my attention.  Clearly, there is a call to strengthen and embolden.  This has been highlighted by the fact that I have inadvertently run into comments on "Athaliah."   I was reminded that it was exactly 20 years ago this week that I had the open vision of 9/11 and heard "Athaliah at the Gates."  A destructive force was pending over our nation.  At that time, the Bush and Gore presidential race was at an impasse and highly contended for.  The vision and word was released nationally.  I heard later that it mobilized the Florida intercessors to pray for the breakthrough.  Florida broke the tie and Bush was established as president.  Interpretation of the vision included a call to establish the Watch (Big Ben is an icon of global time).  This call was affirmed by the fact that the Haftarah readings in Jewish synagogues on 09/11/2001 was Isaiah 61:10-63:9...which includes the famous call of the Watchmen, Isaiah 62:6-7.  We have been diligently pursuing  the call to Watch ever since.  Twenty years later, it is as if things have come full circle.  We face a similar specter of forces that want to tear down the righteous, accuse every motive, usurp God given purpose/vision, and take out people in their influence or respectability.  Let's delve into the biblical story.

Biblical Import  2 Kings 11, 2 Chron 21-22
Athaliah means afflicted of the Lord.  Over the past decades, we have witnessed a growing systemic rule driven by a spirit of Athaliah. If you look at what President Trump as well as other righteous leaders (Kavanagh) have been through, i.e. constant accusations, it is evident the accuser has been relentless.  John prophesies of this tactic of the enemy, “For the accuser of our brethren, who accused them before our God day and night.,”  Rev. 12:10.  We are seeing this hostile and hurtful behavior before our very eyes. It will be increasingly an end-time phenomenon.
However, Watchmen play a key role in taking down this system.  2 Kings 9-11 and  2 Chronicles 23-24 relay the story.  If you look closely at these chapters, you will find a horrific display of strife and murder.  The lineage of David was nearly wiped out.  Jehoram, Jehoshaphat’s son, married Athaliah, Ahab and Jezebel’s daughter, 2 Chron 21:6.  Jehoram killed all his brothers and princes of Israel, those who would be in line for the throne, 2 Chron 21:4.  When he died, Ahaziah, his son, ruled in Judah, 2 Chron 22:1.  Cut down by Jehu, there was no one to assume role of King, 2 Chron 22:8-9.  Athaliah then took the throne.  She killed all the children in line for David’s throne, 2 Kings 11:14, except for one, Joash.  Joash was taken by Jehoiada and Jehosheba, priests of the Lord, and hid in the temple for six years.  Given the treachery and murder during those years, the priests mobilizing the Watch could very well have saved the last seed of David remaining.  Such action preserved God’s covenant with the throne David for the Messiah to come.
During those tumultuous six years, Jehoiada, Jehovah knows, and Jehosheba, meaning Jehovah has sworn, set up the Watch.  He commanded them, “You shall keep the watch of the house, lest it be broken down,” 2 Kings 11:6.  At the appropriate time, they were able to present the true King of Judah, “They made him king and anointed him, and they clapped their hands and said, ‘Long live the king!’
Jehoiada, the priest, greatly influenced Joash throughout his reign.  However, after Jehoiada's death, Joash went astray.  Listening to the leaders of Judah, they bowed down and served wooden images and idols, 2 Chron 24:18.  When confronted by Jehoiada's son Zechariah, the same usurping spirit rose up and Joash killed him, 2 Chron 24:22.  Subsequently, God allowed the army of the Syrians to rise up and execute judgment on Joash and Judah.  The army of the Syrians was not large, but the Lord allowed them the strength to deal a great blow to Israel.  Wounded in the battle, ultimately, Joash was killed by his servants because of the blood of Zechariah.  Amaziah then ruled in Judah and he did right in the sight of the Lord, 2 Chron 25:2.
Role today:
Many prophetic words are flying around regarding this election.  Underneath it, we believe it is a critical hour for the Watchmen to recalibrate, re-envision the importance, and reset the dial towards God’s greater purpose.  Jehoiada and Jehosheba were watchmen who watched over God's covenant plan.  So it is today, God has not forgotten His covenant.  He is looking and calling forth the Watchmen who will Watch and contend for His covenant purposes.  It is an hour to strengthen our resolve, recall, and recalibrate.  There is a defiant system ruling in many places that will increasingly oppose God.  The Anti-Christ spirit is rising and taking root.
As Watchmen, we must know how to respond.  We have emphasized the power of Isaiah 58:9 “If you take away the yoke from your midst, the pointing of the finger, and speaking wickedness.”  Why?  Because Isaiah 58:12 promises, “Those from among you shall build the old waste places; You shall raise up the foundations  of many generations and you shall be called the Repairer of the Breach, and The Restorer of Streets to Dwell in.”  Underneath the destructive forces, God is building a kingdom which will have no end.  The role of Watchmen will be critical for the days ahead.  We must know how to stand and how to build.
Call to All:
This is a major "All hands on deck" call to all.  It is time to strengthen the movement.  It is a time to recalibrate, re-examine, and recall the biblical role of Watchmen and its import today.  God is calling watchmen to rise up, build our communities of trust through prayer and worship, engage with our culture.  We will see strategies released for strength and revitalization of our personal and corporate lives, transformation of our cities, and the advance of His Kingdom in the face of challenging times.