With land assignment at the Continental Divide

Those from among you
Shall build the old waste places;
You shall raise up the foundations of many generations;
And you shall be called the Repairer of the Breach,
The Restorer of Streets to Dwell In.
Isaiah 58:12 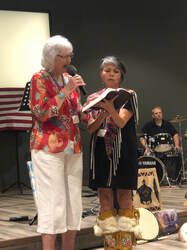 We stand at a historic crossroads in our nation.   The gathering was called as we have seen a gap between God's purpose and destiny and what we are experiencing today in America thrust an ever-widening divide in our nation.  The sense was that we are in a watershed time for our nation.  Watershed means:

"Set or appointed time/ originally a geographical term but also a dividing line in social life/ sudden out-pouring of the spirit/an event marking a unique or important historical change of course on which important developments depend; usually recognized in hindsight."

The Continental Divide represents a physical watershed for North and South America.  By partnering with the host people of the land, we believe it will help us come into partnership with God's plan for the nation to repair the breaches.  As plans proceeded, teams from Canada and Ecuador also joined in for this cry for healing of our land and re-uniting as one.  The cry for healing is real.  As such, we responded to God's call to lay an altar at the continental divide with friends in Canada and Ecuador also participating.  The promise and faith focus is from Genesis 8:21.  After Noah built an altar,  Then the Lord said in His heart, "I will never again curse the ground for man's sake," Genesis 8:21.  We as Watchmen and Gatekeepers were called to contend for God’s covenant purposes.  Building the altar and the sessions before and after were steeped in powerful honor and protocol.  Partnering with the Host people of the land, under direction of the Holy Spirit and revelation, the Lord showed up in powerful ways. Through recognition and honor foundations for us to experience His Presence were laid...and God showed up.  Signs followed.  The report is below. 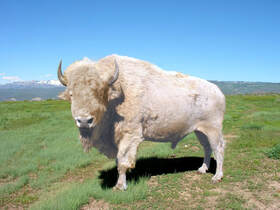 Below are reports and testimonies:

Native American:  Colorado Springs carries the heart of America.  What happens here will impact the nation.   DH USA Watch Day Leader:  "A moment, a movement, a monument.  We cry out as one, and you hear us - a bird swooped over head as we completed our assignment and the wind in the trees seemed to answer Yes and Amen!"
​
​KW Host team:  "The purpose of this gathering was to bring healing to our land as we came together with our Native American and African American brothers and sisters in forgiveness and reconciliation.  AND IT HAPPENED!!!  Part of the assignment was to go to the Continental Divide so our land (America would be healed).  The Continental Divide is the watershed for the rivers to flow East and West and we know as Chuck Pierce prophesied in Dec 2019 that Colorado has the finishing anointing for the nation to be healed.   There were 50 of us intercessors who rode a bus up to Hoosier Pass (praying & worshipping all the way up).  Cindi & Neelie were driving ahead of us to Prepare the Way and felt the angels waiting for us to send them on assignment.  We were instructed by Mary Faus that each one was to declare a scripture as we brought a rock and put on the altar to build.  It was sooo Holy.  Our Holli Kingsbury (who attended Kingdom Ekklesia last weekend) kept calling out "Holy, Holy Holy" as we declared.  the tangible presence of the Lord was felt as all 50 declarations were made.  (& we know from Tim Sheets that angels are sent on assignment by the word of God).  We finished by pouring a whole bottle of Healing of the Nations oil on the altar and then a bottle of water for streams of refreshing to pour into America.  Two sisters from Israel sang a blessing in Hebrew with the Appeal to Heaven sign hanging in the evergreen tree behind them.

On the way down our bus driver pointed out the herd of buffalo (that we didn't see going up) and they were ALL ON THE RIDGE -  like watchmen on the ridge (& we were a bus load of watchmen).  Then right next to the highway in a field by itself was a White Buffalo!    Earlier that morning one of the Native Americans gave Mary a t-shirt that said White Buffalo Prophecy & they were undone when they saw it standing there.   Years ago there was a Native American prophecy about White Buffalo and the prophecy said when you see them you know God has answered your prayers!!!!!  OH MY GOODNESS!!!  This was a sign from heaven.  When Mary Faus was explaining it the next morning in our meeting  & she said "when you see a White Buffalo you know God has answered your prayers" I cried out like I do when the Spirit hits me.  She then looked directly into my eyes and said yes......yes...... I was absolutely undone!  Knowing all the years of prayer strikes all over Colorado, to the capital buildings in Colorado and in DC, knowing all the Summits where we have prayed over America - and all the other prayer assignments SO many have done over the years I FELT THE ACCUMULATION OF ALL OF THOSE AND I BEGAN TO WEEP!   I finally just laid out on the floor sobbing!!!   THANK YOU JESUS!!!!

Terri Brown finished the weekend with talking about all the gatherings that have been held here in Colorado Springs since April.  It started with the Worship Conference at The Road, then the next weekend at Charis in Woodland Park with Randy Clark and it was about healing, then Tim Sheets instructed us on how to send angels, then Kingdom Ekklesia, Kingdom Assignment culminating with the Re-Unite regarding healing of the land through forgiveness and reconciliation.  When she described the FIVE gatherings & called this one the explanation point I was undone again.  I knew it was powerful and going to be so incredible but hadn't thought about the worship one and healing one to make the FIVE!!!  I was undone again and began to weep uncontrollably and laid out on the floor again!   I AM JUST SO THANKFUL TO GOD FOR ALLOWING COLORADO TO BE USED IN THIS WAY!!!!   WE DO HAVE THE FINISHING ANOINTING TO HEAL AMERICA!!!!   IT HAPPENED!!!  I KNOW IT!!!!  THANK YOU JESUS!!!!!"

​​KU USA Watch Central Time Zone Coordinator:  "We talked about the power of forgiveness and the significance of not just addressing the fruit of an issue but looking at the "taproot".   If the taproot (often hidden) exists, then even if the plant and fruit is destroyed, the issue remains.  Although there have been reconciliation acts and requests for forgiveness done, the taproot of separation and obliteration of culture and identity has remained.  We've heard the testimonies of our host brothers and sisters - theft of their lands and homes, systematic stripping of identity and obliteration of culture in the name of Jesus Christ, hearing the sound of being referred to as  "merciless savages" in our Declaration of Independence every July 4th, and so on.  We ALL have suffered as a result.  The land has swallowed the blood of the violence (Gen 4:10-11,  Lev 18:24-29) and absorbed the iniquity, becoming defiled.  Worse still - the Ekklesia has lost the voice of the host people and their connection to the land.  Our host brothers and sisters can teach us to hear creation once again, and together in partnership with the Holy Spirit and the host of Heaven, we can heal our land.

What this Summit did was to take the first steps of removing that unrighteous taproot.  But it is not just a removal of unrighteousness since there needs to be something in its vacated place.  From the worship with native instruments to the building of an altar at the Continental Divide and to the building of relationship between the races, what I saw in the spirit and felt stirring within is the "Taproot" of Christ's Love going deep into the earth.  The power of Christ's Love is unshakeable - it has no limits, no boundaries and cannot be contained.  It has the power to HEAL.  If we as His people will just come into agreement and alignment with His LOVE, if we will just remain plugged into His Spirit, there's nothing we can't accomplish together and in Him.

What I saw during worship on Saturday:  a massive wall of angels surrounding COS and the region all the way to the Continental Divide.  I saw a portal between COS and Heaven bathed in a column of radiant light.  These angels were super excited, joyous.  FINALLY, they were going to be able to fulfill their mission.  I saw angels strengthening feeble and powerless churches, bringing them into a new understanding of the Word and Spirit.  I saw angels partnering with believers and reaping a harvest.  Former unbelievers bowed their knees and confessed the Lordship of Jesus Christ as the powers they had relied upon crumbled in the face and force of Christ's LOVE as expressed by a unified Body.  (NOT "unified" as in "conformed", but unity as Christ intended with each member bringing their gifts and unique expression to the table.)   I realize that Pastors Jack and Terri Brown are already apostles, but I sense an even greater anointing is being bestowed upon them for the region as apostolic parents.  They will help shepherd other churches into this."

ED USA Watch Pacific Time Zone Coordinator:  To say this time was a spiritual experience, would be an understatement.  The gathering had "Hallelujah!  Thank YOU JESUS!" written ALL over it!  No one that attended could possibly remain unchanged – their spirits alone were awakened at a level we haven’t seen in sometime.
A few thoughts to share:

This gathering was a collaboration with the Native American Watch.  The gathering also included collaboration with our black friends and community as it will be held on a strategic anniversary date when slavery was abolished, June 19, or "Juneteenth" (1865).
Ecuador
The Continental Divide is in a strategic place in Ecuador as it is a place of battles and times of conquest in the early days.  Times that were wars for the conquest of territory from those of Spain to the indigenous people of Ecuador.  Much bloodshed has taken place and is a reminder of the arrival of pirates.  God provided a convergence of representatives of the armed forces and indigenous people
ECUADOR: 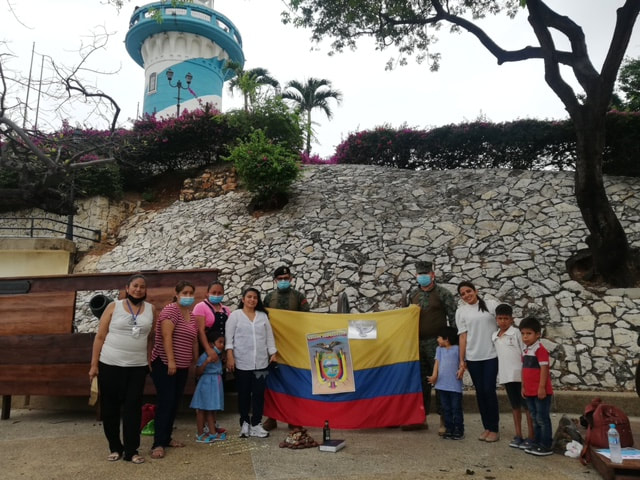 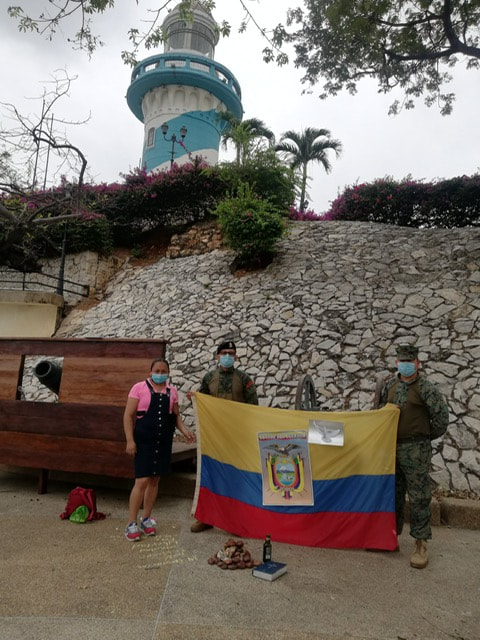 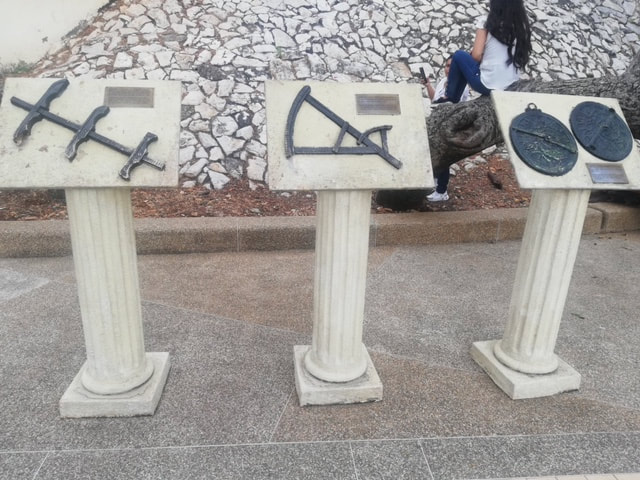 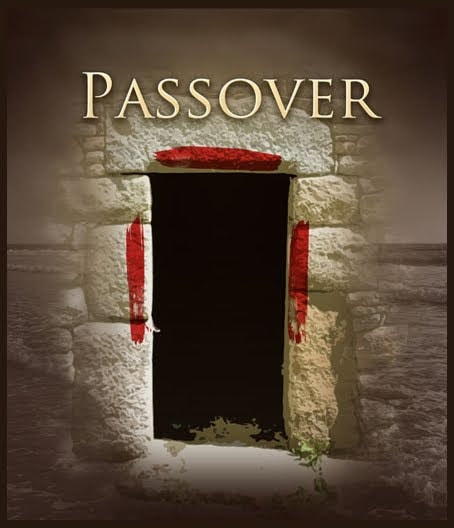