In the Midst of Chaos

"He sent them to preach the kingdom of God and to heal the sick,"  Luke 9:2 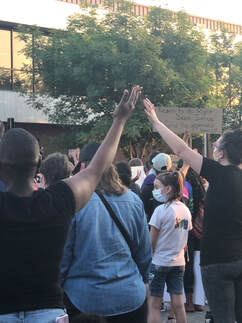 The level of disruption and agony in our nation through COVID-19 and now the killing of George Floyd is a living reality.   The fear and anger unleashed by these assaults have sent waves of enemy tactics now frittering away at the very foundations of our nation.  The critical spirit is driving destructive forces across the nation tearing apart families, businesses, and normally quiet neighborhoods.  Accusations are rife in our media targeting governmental leaders and those in authority in a deluge of accusations.  Cities have turned into war zones and wounds are driving people to look for a cause to join to herald justice, only to see destruction behind them.  How are we to proceed forward?

VISION:
In pressing through the distress, I had a vision of the American flag.  It was being ripped down the middle with multiple hands on either end tugging and pulling it apart.  The tear was getting bigger when one giant hand holding a needle and thread came in to repair the tear.  It was a tug of war, but the tear could not advance as the needle and thread engaged. There was much mending to do, but the needle and thread stayed the course.  Then I sensed the Lord say, “I’m not done with America.”

In the wrestling through the watches this week, the words “I’m not done with America,” were a clear encouragement to me.  We are clearly in a crisis with a war between good and evil in this nation.  The enemy, like always, wants to tear down the viability, reputation, and foundations God has laid in America.  However, as a nation we have a unique and distinct foundation in God paid for by the lives of millions over the centuries.  400 years ago a small handful of Pilgrims landed in America seeking religious freedom.  We are in a nation in which 56 men had the faith to sign a “Declaration of Independence,” against the largest empire in the world and witnessed a miraculous deliverance to that end.  We have a heritage in the motto, “In God we trust.”  Do we?

My attention turned to Moses’ prayer for Israel in Numbers 14:11. The passage carries parallels for today.  It is a powerful prayer when God was about to destroy Israel for giving in to "fear" and "anger" refusing to go into the promised land.   They had succumbed to fear evoked by the reports of the spies and turned in anger towards their leadership, Moses and Aaron.  This is a picture of America today.  Moses' response is a lesson for today.

Moses then turned to the Lord.  These words caught my attention:
Moses contends before God “… Now if You kill these people as one man, then the nations which have heard of Your fame will speak, saying, ‘Because the Lord was not able to bring this people to the land which He swore to give them, therefore He killed them in the wilderness.’ And now, I pray, let the power of my Lord be great, just as You have spoken, saying, ‘The Lord is longsuffering and abundant in mercy, forgiving iniquity and transgression; but He by no means clears the guilty, visiting the iniquity of the fathers on the children to the third and fourth generation.’ Pardon the iniquity of this people, I pray, according to the greatness of Your mercy, just as You have forgiven this people, from Egypt even until now.” Exodus 14:15-19

These words are one of the strongest prayers in the Bible.  Similarly today, the enemy is trying to destroy America, a nation founded on Godly principles, so that God’s name would be vilified.  His strategy is to destroy God's credibility if we, as a nation founded on Godly principles, failed.   Is that where we are headed?  No!  God is not done.  America is not to be a nation displaying and portraying its founder as a weak God. He is King of Kings, the beginning and the end...Lord over all!

NEW MANTLES:
We are in a kairos time when He is inviting us to a higher place in prayer and declaration.  We are to receive new mantles.  Do we have faith in His Word?   Do we believe America has a destiny in God?  If we do, it is a Zechariah 3 moment.  Here, Joshua is before the Angel of the Lord with Satan right beside him taunting and accusing him.  But the Angel of the Lord rebuked Satan and plucked Joshua out of the fire, gave him a new turban and a new mantle.  Then he admonished Joshua, “If you will walk in My ways, and if you will keep My command, then you shall judge My house, and likewise have charge of My courts; I will give you places to walk among these who stand here,” Zech 3:7  The places he would walk would include places the enemy has plundered and set up strongholds.  He would be sent to redeem and restore God's purposes.

WHAT IS THE NEW MANTLE?:
Paul gives instructions in Ephesians 6 in how to “Withstand in the evil day,” Eph 6:13.  One of the keys is to “Shod your feet with the preparation of the gospel of peace.”  What is this gospel of peace?  It is the gospel of the Kingdom.  Paul states, “For the kingdom of God is not eating and drinking, but righteousness and peace and joy in the Holy Spirit.”  When Jesus sent out His disciples in Luke 9:2 and the seventy in Luke 10:9, he commanded them to do two things:When Jesus sent out the disciples and the seventy, it was a violent, resistant culture into which they were sent.  Despite that environment, countless healings occurred, some of which are recorded in the Bible.  In the wake of the COVID-19 onslaught, not only is God calling the Gospel of the Kingdom to go forth fearlessly, but we believe we are on the crest of a healing movement that will not only heal the sick but will heal the nation’s wounds.  It is time for the reconciliatory power of the gospel to be made known and manifest.

HOW TO WALK OUT THE GOSPEL OF PEACE?
HEALING MOVEMENT:
If we seek to use these practical tools, our spiritual feet will be shod with the gospel of peace and we will see the Kingdom expand.  The gospel of peace is not giving into the enemy or promoting injustice through false peace.  It is standing in righteousness and the love of Christ.  If we walk out reconciliation in words and deeds, we will see manifestations of God's divine reconciliation not only in physical healing, but healing of emotional wounds as the Gospel of the Kingdom goes forward, individually, and corporately.   Isaiah 58:12 promises we will raise up foundations of many generations; and we will be called “Repairer of the Breach, and Restorer of Streets to Dwell in.”