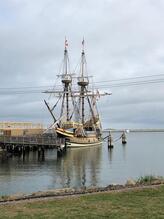 As we are in the 400th anniversary of the Pilgrim's landing and signing the simple but powerful Mayflower Compact, having just come back from a visit to Plymouth, there is one thing we know for sure, we were forever changed.  We came one way and left another.  What does that mean?  We have been in a season of "Reset." You have likely heard the word repeatedly over the past year and will be hearing it again.  We are in a shift.  However, during our journey to Plymouth, the reset shifted to a sense of being re-centered on the righteous roots of our nation. The plumbline of God's purpose fell, and our eyes were opened.  We share these thoughts and pray that hope will penetrate our hearts, particularly in this season of Thanksgiving beset by uncertainty.
The Pilgrims landed in Plymouth on 11 November 1620, 400 years ago.  Their journey was marked by besetting storms wrecking one of the ships initially set to go and pushing their initial launch back to England.  The journey followed years of enduring betrayal, persecution, division, financial strain, illness, and death.  God used these setbacks to strengthen the Pilgrims and hone the remnant who would survive the trials that would lie before them.  They did not know that the Natives had abandoned the land they were about to step on due to a smallpox epidemic that had struck three years prior to their arrival.  There were crops in the field unattended, waiting for them.  Gleaning from these crops and corn storaged and abandoned, provided the food that kept those alive who would survive through the first very difficult year.  Why?  Because they were called by God.  They were in the center of His will, and they knew it.  Little did they know, as they learned to govern the new community, that they were laying the foundations for a new type of government that would operate "by the consent of the governed (1)."  They did not know the precepts they agreed upon would one day produce the longest lasting national democracies in history.  As the Mayflower sailed away to go back to England in April 5, 1621, the remaining survivors of the original community stood and wept watching it disappear in the ocean's horizon.  None chose to go back.
Now, 400 years later, it is as if we have come full circle.  Like the Pilgrims, our nation faces an epidemic with COVID-19.  How do we stand?  How do we fight to see this nation redeemed?  As we contend to build community in prayer, there are lessons from the Pilgrims, many of which are untold in the history books, that are important lessons today.   In pondering the experience at Plymouth, we discovered threads that could help us today build community in prayer and secure the Kingdom's advance.   Now, in days of uncertainty, we believe God is honing a company, like the Pilgrims, that will not relent until His purposes are established.  We invite you into the story in this PDF.  Perhaps by reading, you will go in one way and leave another...re-centered.
Sending our heartfelt thanks to you all for your faithful diligence
Have a blessed and thank-filled Thanksgiving!
Sue and Fred Rowe